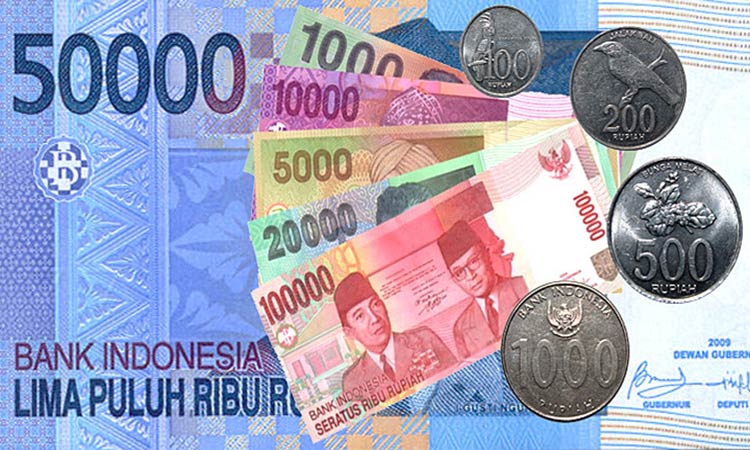 Rupee (Rp) is the official currency of Indonesia. The rupiah is issued and controlled by the Bank of Indonesia, the ISO 4217 currency code for the Indonesian rupiah is IDR. All banknotes and coins use the symbol Rp. The name comes from the Indian currency, the rupee. Indonesians also use the informal name “perak” (“silver” in Indonesian) for the rupiah.

The rupiah is made up of 100 sen, although due to inflation, all notes and coins denominated in sen have completely disappeared. The Rio Islands and the Indonesian half of New Guinea (Irian Barat) had their own versions of the rupee, but these currencies were reclassified to the national rupee in 1964 and 1971 respectively (see Rio rupiah and Western New Guinea rupiah).

The exchange rate of the rupee against the dollar is constantly changing, at the end of October 2010 it was 8900 rupees per 1 US dollar. Indonesia has a very high inflation rate, so don’t be surprised if you find big differences in the exchange rate in different places.

In large cities, hotels, shops and restaurants accept plastic cards for payment. In the tourist places of Bali, you can pay with dollars. But when visiting places that are not popular with tourists, it is simply necessary to have a sufficient amount of rupees with you. Interestingly, some tribes in Indonesia still use barter. Indonesians are often careless with their banknotes, for example, in banks they are simply pierced with a stapler.

You can exchange foreign currency for local at the airport, at banks, at hotels, at specialized exchange offices. The most favorable exchange rate is of course in banks. Be careful when exchanging money in street exchangers, tourists are often deceived in them.

History of the Indonesian rupiah

From the beginning of the 17th century, the Dutch East India Company launched a monetary system (designated “VOC”, “Dutch East India Company”) in what later became the Netherlands East Indies. In 1800, the company went bankrupt and control of the territory passed to the Netherlands. In 1802, on behalf of the then Dutch government of the Batavia Republic, the first coins were minted – low-value copper duits.

as well as silver and gold guilders. The guilder supplanted various local currencies common in the East Indies, including the Sumatran dollar, which disappeared in 1824, and the Javanese rupee, minted by the Dutch, in 1816. Some other kingdoms and sultanates, before they came under Dutch influence, had own coins are in circulation, such as, for example, the keping of the Ache Sultanate (Ache was finally conquered in 1903).

The low-value coins turned out to be a currency that, by modern Indonesian standards, could be considered very stable and be a financial instrument for making daily payments. The first banknotes were issued by the government in 1815. In 1828, the central bank “De Javasche Bank” (Javanese Bank) was founded, which began issuing banknotes the same year. Basically, banknotes were issued in denominations of 5 guilders and more, smaller calculations could be easily made using coins.

Although the roles of the government (issuing coins) and the issuing bank (issuing banknotes of 5 guilders and above) were fairly well established, in 1919 the government began issuing 1 and 2½ guilder banknotes to conserve the metal, largely driven by the First world war. In 1920, ½ guilder notes were issued.

After the outbreak of World War II, guilders were collected, and the government again issued 1 and 2½ guilders in 1941 to make up for the shortfall (partly caused by supply problems with coins that were minted in the US).

In 1942, the Japanese occupied Indonesia, liquidated banks, including “De Javasche Bank”, and declared IOUs invalid. Along with this, it was announced that banknotes issued by “De Japansche Regeering” (Japanese government) would become legal tender from March 1942 (although the existing banknotes remained valid), along with banknotes from 1 cent to 10 guilders printed by the new Nanpo Kaihatsu Ginko Bank.

At the same time, Dutch banknotes were printed in the United States for use until the end of the war. These banknotes, issued in December 1942 and dated March 1943 on the banknotes themselves, had the notation “Nederlandsch-Indische Gouvernementsgulden” printed in Dutch along with additional Indonesian text reflecting the denomination of the banknote and containing the word “roepiah”. As you know, the war dragged on longer than expected and this money was not released on time.

Continuing their occupation, by 1944 the Japanese had identified their long-term strategic interests, which could best be promoted by encouraging Indonesian nationalism. New banknotes were issued, printed in Indonesian, the “Rupee of the Netherlands East Indies”. By the end of the war, due to the actions of the Japanese, there was a massive increase in the money supply – from 230 million guilders in pre-war banknotes to several billion in post-war ones. Along with the actions of the subsequent Dutch War, this caused massive inflation and the collapse of the country’s economy.

At the end of the war, the returned Dutch “Civil Administration of the Netherlands East Indies” (NICA, army) received from the Allies control over the institutions of Japanese administration and on October 10, 1945, resumed the activities of the “Yavan Bank”, starting the issuance of money dated 1943 in New Guinea – since 1944.

This money became known as “NICA guilders”, while all pre-war Dutch banknotes were withdrawn from circulation, and Japanese money changed at a ratio of 1 Japanese guilder to 3 NICA sen.[2] Due to public dissatisfaction with the low exchange rate and the opposition’s reluctance to use Dutch money, Japanese money continued to be used. As a result, NICA reintroduced some old Dutch banknotes into circulation. Beginning in July 1947, new money began to be issued, which was printed and dated 1946 as fully bilingual Dutch-Indonesian guilder/rupiah banknotes.