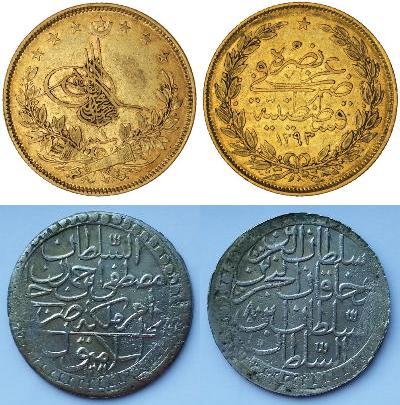 September 13, 2022Comments Off on Late coins of the Ottoman Empire (XVIII-XX centuries)1145.4k

The Ottoman Empire was once a very powerful power that conquered the territories of the Middle East, North Africa, as well as numerous lands in Europe.

But at the end of the 17th century, its power was gradually waning: the empire began to weaken, suffer military defeats and internal turmoil. Let us consider how the Ottoman monetary system developed from the beginning of the 18th century until the collapse of the “eastern colossus” into a number of states.

A small silver coin called ache appeared among the Turks in the Middle Ages, gradually losing value due to damage and turning into a small change. The Turkish sultans should not be reproached for negligence: a decrease in the share of silver in ace promised a big profit for the treasury here and now, and what this would lead to, say, in a decade, people were not particularly worried.

A 2-akçe coin from the time of Ahmed III (1703-1730) traditionally contains the name of the ruler and his father, as well as religious motifs. Although the legends have been almost erased by time, it can be judged that they are written in the Ottoman script, which took a lot from Arabic and Persian.

An even smaller coin of 1 ackee came out from under the stamp a year later and contains approximately the same information on the margins. Curiously, the script is strikingly different from the early Islamic Kufic script. The reason for this is the human craving for fine arts, and because Islam severely limited this area, people in the Muslim East found an outlet in calligraphy.

At the beginning of the 18th century, the Ottoman Empire took up mechanized minting of coins instead of manual minting, which greatly improved the quality of images. Specifically, ache was issued until the 19th century due to the habit of the population to these means of calculation, although others appeared.

The Ottomans had a coin with a rather strange name for the Russian ear: a pair. Samples with a face value of 1 pair were minted from silver of a low standard and were approximately equal in weight to 1 ache, although their weight can vary from 0.4 to 0.6 grams. On the front side.

the main place is occupied by the tughra of the Sultan – an analogue of the European monogram. But the specificity of the Ottoman letter made it possible to fit into it much more meaning than just the initial letter of the ruler’s name. Here, the tughra was deciphered approximately as “Mahmud Sultan, son of Ahmed III, victorious forever.” We are talking about Mahmud I (1730-1754).

A floral ornament is depicted next to the tughra. The reverse shows the place of minting the coin and the year according to the Muslim calendar (all dates in the descriptions are translated into European chronology).

For the convenience of trade transactions, larger money was also required, such as qurush, equal to 40 pairs. Although it was already a fairly solid coin, it was still minted from low-grade silver, which indicates the economic difficulties of the Ottoman Empire. The sultans, although they resorted to damaging coins, nevertheless tried not to do this unnecessarily.

The obverse contains the tughra of the same Mahmud I, the reverse side glorifies his name: “The Sultan of two lands and the Chakan of two seas, the Sultan and the son of the Sultan.” Chakan is the title of the ruler of some Turkic peoples.

This coin with a face value of 1 pair was minted during the Seven Years’ War that raged in Europe. The Ottomans refrained from participating in it, and not only because of the weakness of the state, but also because of the lack of interest from Sultan Mustafa III (1757-1774). His tughra flaunts on the obverse of a small coin, and the mint of Constantinople is indicated on the back. True, it is very difficult to name the year of issue of the pair, because this five-year series was minted without changing dates – 1171 according to the Muslim calendar is indicated everywhere (1758 according to the Gregorian).

There are also couples much more affected by time. This sample was issued in January-March 1774 at the very beginning of the reign of Abdul-Hamid I (1774-1789). Such accuracy is not accidental: Ahmed III died on January 21, and the year 1187 (according to the Islamic calendar) indicated on the back ended on March 13. The mint of Constantinople is also mentioned there and the inscription is added: “The first year of the reign.”

The 80-pair coin seems to contain very little silver and can be considered a billon. At that time, the Ottomans were waging another war with the Russian Empire, and not in their favor, which caused the economy to suffer greatly. In the same year, Sultan Selim III (1789-1807) ascended the throne, whose tughra is stamped on the obverse. The reverse side contains information about the mint in Tripoli, which is on the territory of modern Libya.

The Ottoman Empire had many mints, including in Egypt, where the shown coin of 20 pairs comes from. Although this region has already allowed itself a lot of liberties, taking advantage of the weakness of the power of the sultans, the obverse still flaunts the tughra of Selim III, and the inscription on the back roughly translates as “The thirteenth year of reign”.