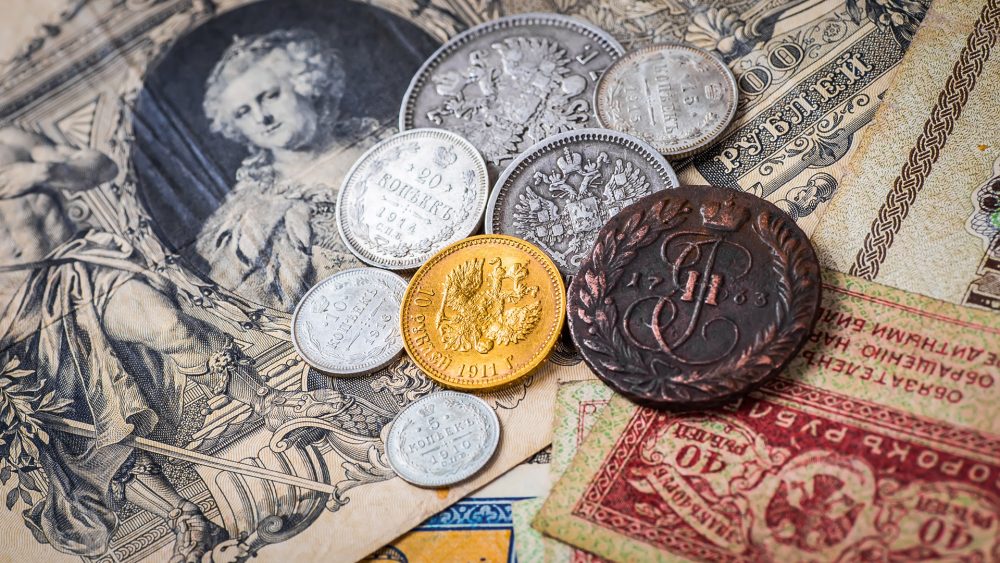 There are such a large number of ancient royal coins that it is not at all easy to decide on the collection of a specific collection or figure out the price of a coin. To make it easier for you to navigate this abundance of money, we will consider different types of coins: by metal, type of circulation, rulers, name and denomination. We will also analyze the factors that affect their prices.

tell you how to determine the cost and give advice on selling and buying coins. Although tsarist Russia represents a rather extensive historical period, we took for consideration the period from 1700 to 1917, that is, from the time of the start of the monetary reform under Peter the Great and until the overthrow of tsarism under Nicholas II during the revolution. Although coins in Russia were used as money long before Peter I, it was he who brought the country’s monetary system to the international level.

Types of royal coins for metal

From the time of Peter I to the last years of the reign of Nicholas II, three main metals were used for coins: gold, silver and copper. The number of issued denominations and circulation of coins from each metal depended on various reasons. It was the presence of the metal itself, its prices, monetary policy and more. For example, when a bet was made on silver, that is, settlement transactions within the country and with foreign partners were carried out with silver coins, and they also provided paper money.

Almost every emperor sooner or later faced a shortage of metal and was forced to take some measures. So, when they melted down silver sets in order to mint coins from them. The most frequent of these measures was the increase in the mint stop, that is.

when more money was minted from one pod of metal than before. This allowed for a quick replenishment of the treasury in a given period, but in the end always led to a significant depreciation, since each coin contained much less base metal than before. Plus, an increase in the coin foot led to an increase in the number of counterfeiters, as it became profitable to mint more expensive coins from cheap copper.

Under Nicholas I, platinum coins, unusual for the people, were also minted in connection with the discovery of large deposits of platinum. Although platinum cost 6 times more than gold, people did not trust the strange coin and exchanged it for gold. Minting was carried out only from 1828 to 1845, as the price of platinum began to fall, and this threatened an influx of fakes.

And when they released a batch of copper-nickel coins, and the issue of minting such money was raised long before his reign. Many local and foreign entrepreneurs tried to convince the Russian rulers to mint nickel coins, but each time the case was limited to only trial copies. For example, in 1887, 68 trial nickel coins with the date of 1883 were found at the mint of St. Petersburg.

As it turned out, they were created by an industrialist from the Urals from nickel from his mines and offered to mint a nickel coin. By the time of the next attempts in 1911 and 1916, large deposits of nickel were found in the Russian Empire, and it was advisable to mint money from it. However, the issued batch of copper-nickel coins in the difficult years of the First World War and the impending revolution also remained a trial one. Some trial coins were made of aluminum, in particular in Armavir in 1918.

There were also coins made of such an impractical metal as iron on the territory of the Russian Empire. After the seizure of part of the Russian lands by Germany, the invaders faced the problem of lack of money. The fact is that the people prudently hid the silver and gold coins that were circulating in Russia at that time.

and paper money depreciated too much. Then Germany began to produce for the occupied territory in Berlin and Hamburg the so-called oust-penny from inexpensive iron. After the removal of the occupation, iron coins depreciated and fell out of circulation, and due to the softness of iron and susceptibility to corrosion, they quickly rusted, bent and scratched.

Types of coins of the Russian Empire by type of circulation

According to the type of circulation in tsarist Russia, the following coins were issued: negotiable, commemorative, commended, medals, donative, trial, special, as well as tokens and beard marks.

Circulating coins were the main ones and were issued for mass circulation. Some of them were withdrawn from circulation and later melted down, so they have not survived to this day or have been preserved in small quantities.

, granted and issued in honor of any events or for the purpose of giving to subjects for special merits. This also includes tokens, which were also issued on some significant occasions, but did not have a face value.

Trial coins were created before the mass launch to ensure the quality of minting, to approve the design, to check the profitability of production, and for other reasons. Sometimes these were attempts to create a new system of coins, for example, they tried to introduce the Rus under Nicholas II, copper plates under Catherine I and Sestroretsk rubles under, but for various reasons, it did not reach mass production.