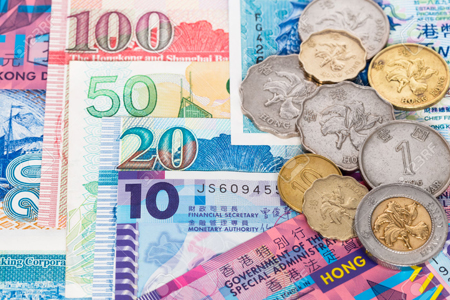 What currency to take to Hong Kong?

The Hong Kong dollar (HKD) is the official currency in Hong Kong. What money to take with you for exchange – US dollars, euros or other Asian currencies, except for rubles. Cash payments can only be made in Hong Kong dollars. Card payments are accepted everywhere.

To better understand the specifics of Hong Kong’s modern financial policy, it is necessary to look a little into the history of the region.

Hong Kong first acquired its own money with the onset of 1895. The area was distinguished by brisk international trade, and the money of different countries was in use, but the government decided to introduce its own currency into circulation. The new money, called dollars, was first issued only in silver equivalent: the coin contained 24.26 grams of pure silver.

During the Japanese occupation, which lasted from 1941 to 1945, new monetary units were introduced into the region. At first, the Japanese invaders used Chinese banknotes with denominations from 10 cents to 100 yuan for settlements in Hong Kong. Such paper money was issued with a special mark “HongKongGovernment” in English and with an additional text note in Chinese. The inscription in Chinese read: banknotes are temporary and are equal to the face value indicated on the obverse. An indication of the law of the government was also noted, and the year of issue was affixed.

The temporary currency in Hong Kong was later superseded by the military Japanese yen. They were specially issued for circulation in Hong Kong and exchanged at the rate of two dollars to one yen, and then 4 dollars to 1 yen. The money exchange lasted 1.5 years and was officially completed for a year.

From that moment on, the Japanese yen was recognized as the only legal currency in occupied Hong Kong. However, the indigenous population of the region remained faithful to the local currency and continued to pay in the Hong Kong dollar. Actually, at the end of the war and the restoration of the British protectorate, this monetary unit was fully returned to circulation.

Since then, Hong Kong dollars have gradually strengthened their positions and eventually entered the international currency market. So, since 1983, the local currency has been pegged to the US dollar, which is still valid today. But we will talk about this a little later, when we begin to consider the exchange rate of the Hong Kong dollar. In the meantime, we offer you to find out what Hong Kong banknotes look like.

How much does a taxi cost?

The fare for landing in a Hong Kong taxi is approximately $22 (177.0 ₽) and includes 2 kilometers, each subsequent kilometer will cost 8 dollars (64.4 ₽).

Approximate exchange rates of the world to HKD
It is not for nothing that the Hong Kong dollar has a reputation as one of the most stable and reliable currencies in the world. It is supported not least by the fact that the entire money supply is 100% secured by the foreign exchange reserves of issuing banks, denominated in US dollars. The issuance of treasury notes in excess of these holdings is prohibited by Hong Kong’s currency laws.

It should be noted that a rather rigid exchange rate peg to the North American currency has been formed in the autonomy. Over the past five years (from 2014 to 2019), the Hong Kong dollar exchange rate against the US dollar fluctuated within a very narrow corridor: from 7.75 to 7.85 HKD per 1 USD.

The current value of the currency and its dynamics in the short and long term can be viewed on the MoneyRatesToday currency converter website.

Hong Kong metal money is issued in denominations of 1, 2, 5 and 10 dollars, as well as 10, 20 and 50 cents. Note that 1 Hong Kong dollar equals 100 cents. On the obverse of the coins during the colony, a portrait of the English monarch was depicted, and after the reunification of Hong Kong with the PRC, they began to mint the bauhinia flower (local orchid). The reverse is reserved for denomination.

In principle, the coins are quite standard and of little interest. Cents are minted from an alloy of nickel, steel and brass, and bimetals and an alloy of copper and nickel are used to cast dollars. It is noteworthy that the Hong Kong coins for 2 dollars and 20 cents are designed in the form of a polygon with wavy edges.