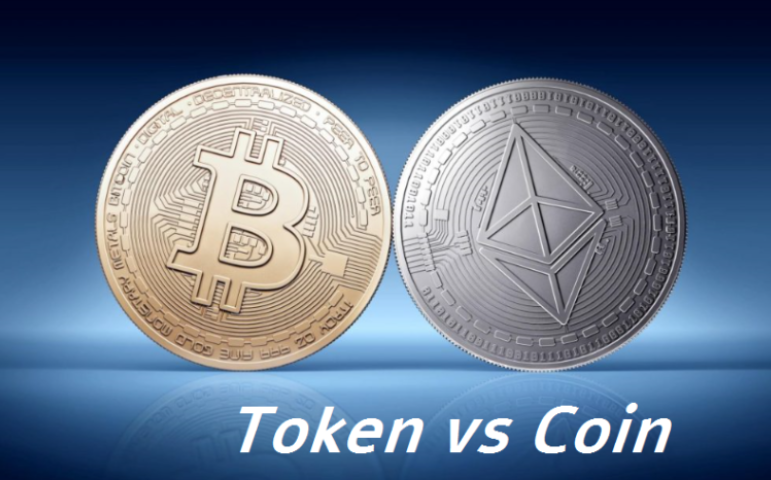 Difference between coin and token in cryptocurrency

June 15, 2022Comments Off on Difference between coin and token in cryptocurrency41101.4k

Beginners and experts alike often use coins and tokens as interchangeable words.

Coins are a digital currency that runs on its own blockchain. With their help, you can purchase goods, services and conduct transactions between users.

The main characteristics of coins are to be a payment unit, a means of exchange and have their own value. Coins work completely independently, because they do not require any other platforms for this. An example is bitcoin, which is the native currency on its blockchain.

have their own blockchain. Only users of this network can perform any actions with coins.
perform the function of money. In addition to transferring funds between users of the blockchain network, coins can be withdrawn to the usual “ordinary” money – for example, a dollar.
have a high level of security. To prevent leakage, individual encryption algorithms are used.

Tokens are virtual assets, you can say shares, which are created on the basis of an already existing platform. They are used to provide services or certain rights within the system itself, the platform. For example, for investments, access to some products.

payment for advertising. Tokens can be exchanged for some other services or sold for another currency. To make it easier to understand, let’s draw an analogy of tokens with a gift certificate to a store. You cannot go to the theatre, for example, with this certificate. So are tokens that are aimed at certain services.

Features of tokens are that they:

work on existing platforms (many of them are based on the Ethereum blockchain)
in some cases, they serve as an analogue of the dollar (stable coin). Suppose a company wants to conclude an international contract and it may well use tokens as a means of payment. This practice already exists. The most popular token is USDT.

Summing up, now we understand that tokens and coins are completely different things. They at least differ in the method of creation and scope. Tokens are made much easier – just take a ready-made template on one of the platforms.

This will not work with coins, it will be necessary to develop a new platform or change the code of an existing one. In general, the differences between these two concepts are significant. Now you can tell about them to those who think that coins and tokens are one and the same.

Blockchain native coin and token are so close concepts that many novice cryptocurrency investors confuse them. But they should not be completely identified, since there is still a difference.

Bitcoin has become the first cryptocurrency that runs on its own distributed ledger and is used as a means of payment between participants. Therefore.

BTC has become the standard by default and is called a coin. The rest of the settlement units that operate on the basis of other platforms are called tokens. Let’s consider what is the difference between a coin and a token in cryptocurrency, as it is important for both the investor and the developer.

Features of a coin in comparison with a token Let’s highlight the main and most important characteristics that distinguish the concepts under consideration from each other.  That is, the latter works on an existing platform and complies with a certain standard (ERC-20, TRC-20 or another).

For the coin, its own blockchain is developed, usually with unique properties. For example, the Solana coin has a special consensus that uses a timestamp.

Use as a means of calculation. The main function of the coin is settlements between project participants and beyond.  The advantages in comparison with conventional currency are complete decentralization and independence from the decisions of the state authorities of the country or financial institutions.

The possibility of extraction. Coins are always issued according to the rules provided by the developer. For example, bitcoin appears as a reward for the work of miners and their solution of complex mathematical problems. And ether in protocol 2.0 is added for storing coins and validating transactions.

For example, the bitcoin blockchain is not well adapted for practical use. It can only process transactions. That is, it can only run a limited number of smart contracts. In contrast, Ethereum is a platform that was originally developed for Dapps, DeFi and smart contracts. Therefore, now it is more in demand. Cryptocurrency ether is used not only as a payment method (like bitcoin), but also as a “fuel” for the functioning of the entire platform.