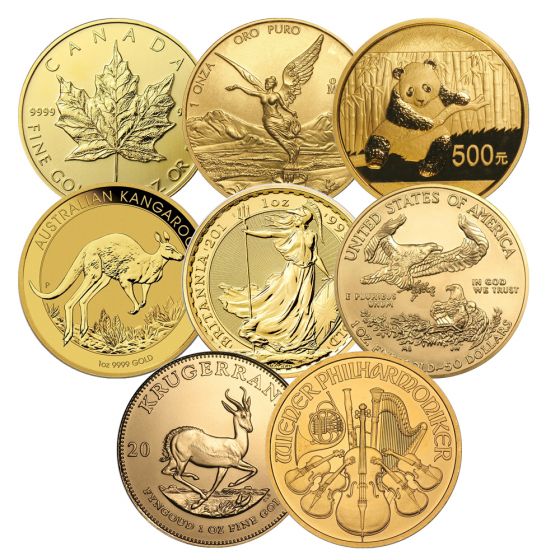 Historically, they have been among the most famous. Each copy remained in demand for decades.

The American Eagle Series, first released in 1986, has been a hit with investors. The two main reasons are the high purity of the gold contained and the relatively low prices compared to the spot price.

The Eagle contains one troy ounce of gold with a fineness of 0.9167 and has a face value of $50 dollars.  Although, of course, it would be reckless to give away this valuable gold coin at its face value.

It is at least one of the gold investment coins most often included in investment portfolios.

On the obverse is a full-length figure of Lady Liberty, with a raised torch in one hand and an olive branch in the other, in the rays of the rising sun. The coin also has the inscription “Liberty” (freedom), the year of issue, 50 stars, symbolizing the number of states, and the building of the Washington Capitol.

The reverse depicts an eagle with an olive branch flying towards a nest with an eagle and chicks, as well as the inscriptions: “In God We Trust” (We believe in God), “UNITED STATES OF AMERICA” and “FINE GOLD”.

The obverse of the Golden American Eagle follows the design of the most beautiful US coin – the golden double-headed eagle of Saint-Gaudens.

It is interesting that at first, in 1986-1991, the year of issue was minted on the golden Eagles in Roman numerals, then they switched to Arabic.

The best coins for investment in the world are those that are on the IRA list. An Individual retirement account (IRA) is an Individual Retirement Account, which is a type of retirement plan in the United States.

An IRA can be opened by any individual at will. When choosing a method of investing in gold coins, they must be selected from a closed list. This list includes the most liquid and popular coins in the world, except for the Krugerrand.

The best gold investment coins are bought not only for the sake of investing in gold, but because of their beauty and high quality. Small coins are intended for gifts, as well as to make investments accessible to the general population. In many countries of the world, transactions with coins are not subject to VAT, which adds to the attractiveness of this investment.

Fineness – the gold content in a coin, investment coins are usually 900-99999 or 90-99%. Due to the fact that gold is a very soft metal, other metals (copper, silver, and others) are often added to coins. The higher the fineness of the coin, the more fragile it is, requiring careful handling. For investment coins, the main thing is not the sample, but the amount of gold in the coin, which is measured in troy ounces.

The main rule for buying investment coins is to purchase the following coins:

which have received international recognition and hold the brand for many years;
which are easy to buy and sell at any time and in any country;
which are reliably protected from fakes, their quality is on top.

Let’s go beyond the United States. Investment coins are a huge world of beautiful and sought-after gold coins from around the world.

1 ounce Gold Maple Leaf’s trade at a premium near spot prices and are commonly found in investment portfolios.

Although this is an entirely Canadian coin, many investors outside of Canada also purchase it. There are several good reasons for this.

In addition, diversifying your investment portfolio with international gold coins has its advantages. It can help increase the attractiveness of physical metal holdings and overall liquidity.

Gold coins in Russia are the main instrument for investing in physical gold, despite the relatively small size of this market, due to the fact that neither bars nor jewelry can be considered as such.

Ingots are inconvenient due to the presence of VAT (+20% to the purchase price and ZERO VAT refund in case of resale) and the regulation of turnover in the secondary market – for example, individuals cannot trade ingots among themselves. In addition, the number on the ingot implies special control and accounting: the state wants to be aware of who is the last legal owner of each particular ingot. Of course, the last thing owners of physical gold would like is for Big Brother to look into their pocket.

As for jewelry, the spread between the price of buying an item and selling it as scrap gold completely makes it meaningless as a financial investment.

Russia is one of those countries in the world (they can be counted on the fingers of both hands) in which there is a mass – in millions of copies – minting of investment gold coins from precious metals.

Other similar countries are Austria, USA, Canada, Australia, China, and South Africa. A number of countries, such as Great Britain, Belarus, Kazakhstan and Armenia, issue investment gold coins in more limited editions. All the rest mint only commemorative and collectible coins with very small mintage runs.

This is partly a tribute to the tradition associated with the fact that due to the great political upheavals in the 20th century in Russia and the large-scale “confiscatory” monetary reforms and depreciation of deposits accompanying them, paper notes, bank deposits, and in some cases, even real estate, turned out to be not a very useful tool for long-term

But gold coins turned out to be very useful, allowing savings for their owners through all these financial and socio-political upheavals.