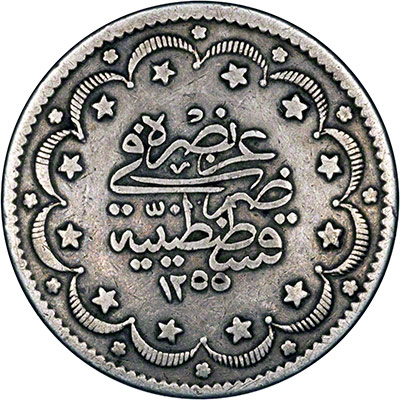 Turkish silver coins officially appeared in 1923, when the Ottoman Empire collapsed and the new ruler, Mustafa Kemal Atatürk, established the Republic of Turkey. Long before that, in the country, in the Aegean Sea region, for the first time, round-shaped money made of precious metals was issued and set a standard that began to be used in neighboring states, and then around the world. Thanks to such features, silver pieces with Turkish symbols are one of the most interesting for numismatists.

The first money from precious metals in the territory of ancient Turkey appeared in 640 BC. e. The richest ruler of his time, the Lydian king Croesus, ordered the issue of round coins, and also set the standard for the purity of gold and silver 98%.

Old copies corresponded to the same characteristics, so they quickly spread far beyond the borders of the country. Coins were issued mainly from electrum (an alloy of gold and silver). The emblem of Lydia was minted on the surface, which confirmed the sample, weight and place of manufacture.

When the Ottoman Empire was formed, coins made of silver – ace – became widespread. Initially, a precious metal of the highest standard was used for production, but during the reign of King Murad III (1574-1594), the purity and weight decreased significantly, so the value and popularity of money fell. In the 19th century, ache became the smallest billon coin.

The appearance of Ottoman money made of silver has changed. According to Islamic canons, it is forbidden to depict living beings on the surface. The obverse and reverse were decorated with Arabic script – prayerful parting words and information about the place of minting, as well as the name of the ruler and his years of reign. Did you know? In Ottoman Turkey from 1469-1918, prices and wages were measured in silver coins or grams of silver.

a large silver coin of Ottoman Turkey appeared – qurush. Initially, this name was used for European money made of precious metal (Reichsthaler – reyal-kurush, Levendalder – asadi-kurush). The Ottoman Sultan Suleiman II ordered to replace the foreign currency that was in circulation with his own full-weight monetary unit. The first coins weighed 26 grams, but over 200 years this figure has significantly decreased and began to be only 1.2 grams (by 1900). When the gold standard was adopted in Europe, the silver qurush was equated to the gold lira 100 to 1.

Mustafa Kemal Atatürk became the ruler of the Republic of Turkey. His portrait adorns the new issues of Turkish silver coins. The first money from the precious metal was issued from 1923 to 1928. The coins of this period were the last Turkish examples with Arabic script. The next series was released in 1934. The circulation included 1 lira of precious metal 830.

whose weight was 12 grams. A year later, the series was supplemented by 25, 50, 100 qurush. Coins continued to be minted with short breaks until 1948. Inflation led to the fact that the production of silver and gold coins in Turkey had to be suspended. Did you know? In 1918, after the armistice at Montrose, the economic situation in Ottoman Turkey deteriorated.

Food prices have risen due to insufficient production.  The city ranked third in terms of price increases in the post-war period. A family with two children spent 500 korus weekly on food. In 1918, bread cost 34 qurush, 1 kg of flour – 45 qurush, a kilogram of sugar – 195 qurush, rice – 92 qurush, tea – 500 qurush. In 1960, the Turkish Mint resumed production of silver coins.

Every year, new series of commemorative copies were released dedicated to important dates in the history of the country, great people, flora and fauna, sports and attractions. For minting, precious metal 830-980 samples was used. All issues were decorated with the inscription TURKIYE CUMHURIYETI (Republic of Turkey), so the coins made of precious metals issued in this country were called Cumhuriyet.

1980 – Education for rural women; 1981 – 100 years since the birth of Mustafa Kemal Ataturk; 1982 – Football World Cup; 1988 – Olympic Games; 1990 – World Cup in Italy. Did you know? The denomination of Turkish commemorative and commemorative silver coins is varied. In connection with inflation, which was observed in the country for a long time, there were two types of lira – old and new.