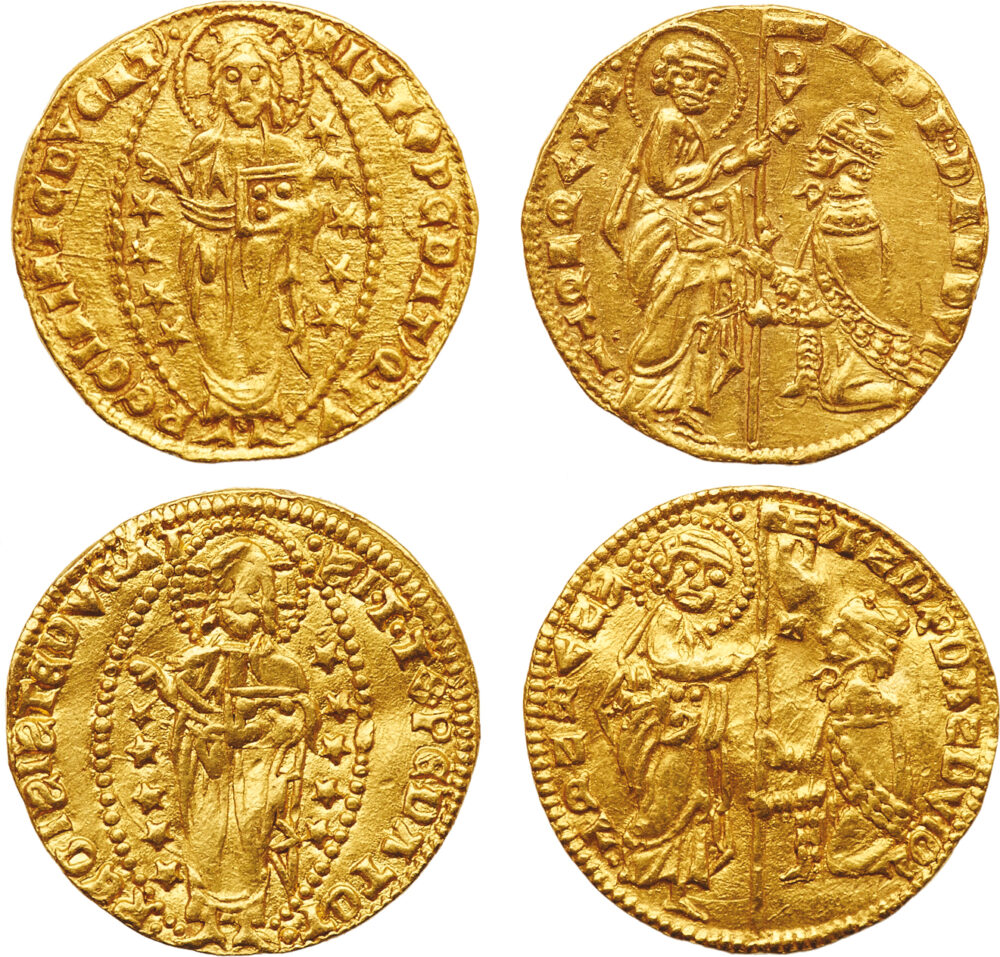 Monetary business of the Republic of Venice in the XIII-XIV centuries.

January 25, 2022Comments Off on Monetary business of the Republic of Venice in the XIII-XIV centuries.35145.5k

The most powerful peaceful instrument of Venice was its coins made of precious metals: from the end of the 12th century. – a silver Grosso (Mattapan), and since 1284 – a golden ducat. With these coins, Venetian merchants paid throughout the Eastern Mediterranean for grain, spices, furs, timber and slaves, they paid for the services of spies, they were presented as a gift. The Venetian mint was responsible for the quality of the coin and the sample of the metal contained in it.

On the obverse of these coins, Christ is depicted seated on the throne, with the Gospel in his left hand, on the reverse – the ruling Doge, receiving the banner from St. Mark, the patron saint of Venice. The inscription framing this composition contains their names and the title of Doge.

It is traditionally believed that the Grosso weighed 2.17 g, but in reality the weight of individual specimens could fluctuate by tenths of a gram, both up and down. The production process involved obtaining a certain number of coins from a brand of silver (238.5 g). For example, in 1278 the mint was ordered to produce 109.5 grosses from a silver mark.

The care of the Venetians about stability and maintaining a high standard of currency is truly admirable, especially if we remember that there were no own deposits of precious metals in their possessions. In the Middle Ages, often with the impoverishment of mines or the urgent need for large sums, the content of the precious metal in the coin was significantly reduced. The Venetians went the other way. Strict quality control of the metal was introduced at the mint, and issues related to the regulation of monetary circulation periodically appeared on the agenda of the executive authority of the republic – the Council of Forty.

The mines of Germany, the Czech Republic, Hungary, Serbia and Bosnia became the source of precious metals for the republic, silver also came from Byzantium. Individuals could sell to the mint or recon the silver and gold they had. Not only old, cut coins were accepted here, but also, at the request of the owners, jewelry and vessels, as was the case during the infamous Chioggia War in 1378-1381.

it was required to submit a declaration within two to three days, and then submit it to the mint for re-minting. Here they were taken by weight and remolded, and the resulting alloy was cleaned of impurities and samples were taken, bringing the purity of the precious metal to the established standard. For the purification of silver, the so-called. cupellation process. Francesco Pegolotti, the author of the famous “Practice of the Trade”, in the recipe for cupellation mixture mentions grapevine ashes, goat and deer horns, twice-boiled bones of a male roe deer, emery and borax (sodium salt of boric acid).

but in general the choice of ingredients was quite wide. After heating this mixture in a furnace, it was required to add lead in a certain proportion, and when it melted, silver or its alloy with gold. Then it was necessary to supply air to the crucible with the help of bellows. As a result, base metals and excess impurities reacted with the components of the mixture, separating from the precious metal. After cooling, it was weighed again, thus determining the loss in weight, or “waste”. The cupellation procedure at the Venetian mint was repeated up to three times.

If an admixture of gold appeared in the purified silver, they were separated by heating in a crucible with sulfur. Silver, mixed with sulfur, rose to the surface, while gold remained at the bottom. Further, silver was separated from sulfur by heating the mixture with iron, and gold was purified to the highest standard (24 carats), repeatedly heating the mixture with clay and salt. Base metals have also been isolated to be used as ligatures – additives to the precious metal for strength and wear resistance. Before being mixed again in the crucible, but already in the prescribed proportion, the precious metals were tested on a stone.

Ingots of a certain weight were cast from the prepared alloy, forged into thin metal sheets and cut into squares, from which round blanks were cut. These blanks were selectively weighed, heated, bleached in crushed tartar, salt, and sometimes urine. And only after these various procedures, the blanks were transferred to the minters in order to become full-fledged coins.

The fineness of Venetian silver grosses has remained consistently high for decades. The results of modern X-ray fluorescence analyzes show that on the surface of coins of the late 13th century. contained from 89 to 97.5% silver. The alloy also contained at least 2–3% copper, minor amounts of lead, mercury, and gold.

Before the shining circles of the precious metal were sent to the hands of merchants and money changers, they once again went through the procedure of checking the weight and quality. However, the control did not end there. Special officials who had the authority to check safes and changers’ houses made sure that the weight of the coin in circulation was preserved, and especially enterprising citizens did not cut it off, depriving it of part of the value. Those caught in possession of circumcised coins were expected to be fined. For money changers, it was 8 denarii with 1 Grosso (i.e. ¼ part.

for private individuals who are not so experienced in such tricks – 2 denarii (1/16 part). The punishments for those who were directly involved in such fraud were much stricter, up to cutting off their hands, followed by expulsion from the city. Bribery and fraud with precious metals at the mint itself were punished even more severely,

up to the death penalty. Such was Venice – drowning in wealth and luxury, she first of all sought to protect the interests of her own citizens, that community of people who worked day and night for the good and honor of the republic, protecting it from military threats, economic turmoil and natural disasters. And even if the speeches of the cunning and pragmatic Venetian turned out to be false, one could still believe the Venetian Grosso or ducat.