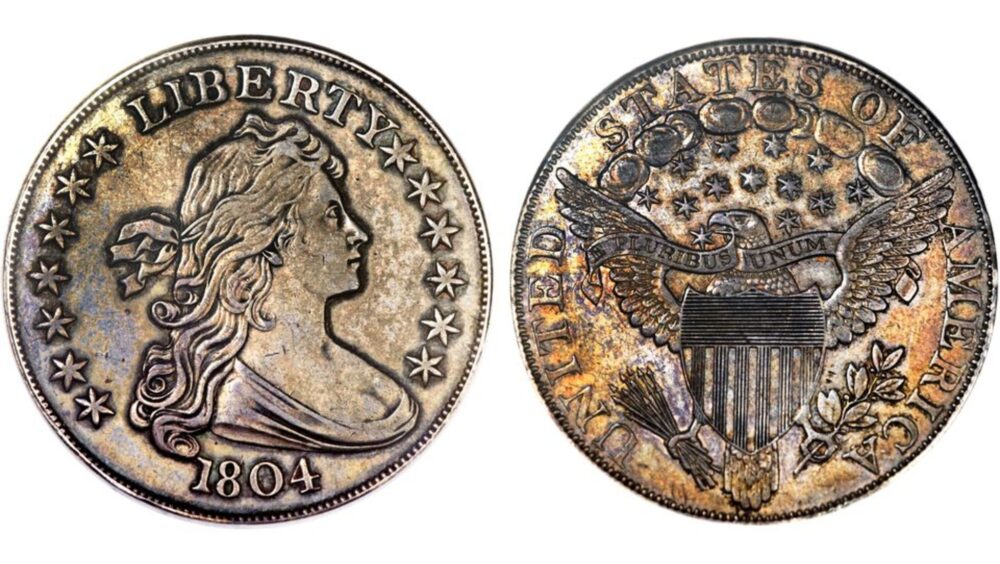 and the next season you just watch the competitions of the young shift from the stands. So it is with coins: until recently, the double florin of Edward III and the Brazilian gold of 1822 in honor of the coronation of Pedro I were on the lists, and now they are practically not remembered. In anticipation of the auction, let’s go over the list of the most valuable items for September 2020 and remember what amounts were posted for them at various auction sites.

This coin might not have been born if not for China. When the leading powers of the world were already inclined towards the universal introduction of the gold standard, silver remained in China. Because of this, trade operations were carried out with silver coins, most of which were Mexican pesos, which earned the trust of many Asian countries. To compete with Mexican silver, a monetary act is issued that provides for the minting of special coins with the name “trade dollar” (“Trade dollar”). According to calculations.

there would be little more silver in the American coin than in the Mexican one, and in theory trade dollars would quickly force the pesos out of the market.  The issue was also crippled by the decline in the cost of silver. Clever people in Asia began to buy coins at the exchange value of the metal (about 80 cents) and ship them to the United States, where they were accepted at face value – 1 dollar. Congress had to pass a law according to which trade dollars lost the status of a means of payment. However.

If in South Africa this pound has a cult status, then the foreign public has heard little about it. Gold pounds of this type have been minted since 1874. In 1899, when Britain again tries to take control of the Transvaal, the Republic of South Africa begins to have difficulty issuing gold coins. The stamps ordered in Germany with the date “1899” were intercepted by the British.

A simple solution is proposed: to mint coins with last year’s stamps, but also to knock out the current date in the free space of the coin field. The very first blow showed that the additional “nine” was too big and did not fit between the piping and the portrait of Paul Kruger. The remaining batch was overmined with smaller nines, and they were nicknamed “Double 99”. They decided to keep the unique coin for history.

In collector circles, it is called “Single 9” (“Single 9”). The rarity had to acquire another semblance of a countermark: when the US Consul General owned it, he scrawled the letter “M” in the cut of the portrait – the first letter of his last name. South African collectors managed to return the coin to their homeland when it appeared at the sale of the collection of King Farouk. Interest in it is only growing, as is its price. In May 2010, at the next sale, 20,000,000 South African rends were given for it, which is equivalent to 4,000,000 US dollars.

In 2007, Canadians set out to create the heaviest coin in the world. A center was chosen by weight, gold was chosen as a metal, and a million was chosen by face value. A 100-kilogram coin was included in the Gold Maple Leaf series, simultaneously advertising the “five nines” – an exceptionally high degree of metal purification.

So six copies appeared, each of which was proudly called “Big Maple Leaf”. The record of Canada was going to surpass the Bank of Russia, planning to issue a coin of one and a half centers for its 150th anniversary. For technical reasons, the issue did not take place, but a year later Australia surprised the world by showing a unique gold coin weighing one ton.

Of the six copies, five were put up for sale. The price of gold in a coin, which at that time was more than four million, did not bother investors. Here are the data from the Dorotheum Auction House, where one of the Big Maple Leaves was sold for $4,070,000. Once again.

the Big Maple Leaf caught the attention of the world press when a copy exhibited at the Bode Museum in Berlin was stolen. The criminals were quickly caught, but the coin was never found. According to forecasts, it was sawn into pieces and melted down for an early sale. So there are only 5 copies of the Big Maple Leaf left in the world. I must say that due to the sharp rise in the cost of gold, the price of each of them has increased markedly.

Actually, there are no legitimate dollars of 1804. The entire circulation (19,570 coins) was minted with stamps with the date “1803”.  However, during the presidency of Andrew Jackson, the government decided to establish close relations with the rulers of several Asian powers. The sent delegation reported that the gifts brought did not make a special impression and advised them to think about some valuable numismatic gift.

The solution was the minting of special sets containing the entire coin range that was in circulation at that time. Since the old stamps could not give the desired quality, and according to the documents, the last minting of dollar coins was made in 1804, the engravers, without understanding, cut out the stamp of a previously non-existent dollar with the date “1804”.