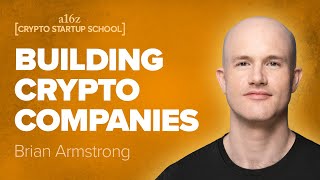 How Brian Armstrong Created The Largest US Crypto Exchange

December 7, 2021Comments Off on How Brian Armstrong Created The Largest US Crypto Exchange47149.9k

“About 10 years ago, I formulated a goal – to create a technology company worth $ 1 billion. I have never founded a company worth even $ 1000 in my life. I didn’t have a business trying to do something ambitious. But day after day, I continued to write down [on my list of goals] this goal, believing that it would help focus on it ”- so began his vow of giving (The Giving Pledge) Brian Armstrong.

Of all the ways to get rich off the boom in cryptocurrencies, Armstrong has chosen one of the most conservative. He followed the logic of the times of the gold rush: as a rule, it is not those who wash gold that get rich, but those who provide them with services.  Its exchange is the largest in the United States (data from Bloomberg, Insider, etc.). As a unicorn, she became the first of the crypto companies in August 2017. The following year, he opened his first charity project – GiveCrypto.org. In 10-15 years, cryptocurrencies will replace the dollar as a reserve currency, says Armstrong. Based on this logic, his charitable organization provides money to the poor in cryptocurrency. Philanthropists exercise the right not to disclose their identity, and poor people get used to using alternative money.

Based on the latest deal on NASDAQ Private Market (the division of NASDAQ where companies are traded before they go public), Coin base is valued by investors at $ 90 billion, Bloomberg reported.  According to the agency, the securities of the crypto exchange will no longer be traded on the NASDAQ Private Market – at the end of March it is going to go public through a direct listing.

If Coin base does not fall in price, then 38-year-old Armstrong’s fortune from the current $ 6.5 billion (Forbes estimate) could reach almost $ 15 billion (Financial Times, FT estimate). At the same time, he will not have restrictions on the sale of shares, unlike traditional IPOs.

He has a passion for entrepreneurship since childhood. He recalled being dragged to the principal’s office for selling candy brought from home on the playground. In high school, he became interested in programming. “I was a nerd who read Java books,” he recalled in an interview with FT. But while still in school, he began to make good money, developing websites for small businesses from his hometown. In order not to be distracted, he made an agreement with a neighbor and worked from his garage. During his studies, he worked for four months as an intern at IBM, for five months at Deloitte and Touché, but his main focus was on his own business. She and dorm roommate John Nelson provided services to the students: they negotiated room reservations in bars for the festivities and shared the discount that the owners of the establishments gave them as people bringing clients to them.

But another idea became the main one. In 2003, Armstrong and Nelson founded University Tutor, an aggregator of tutoring services. The Internet was not developed in those years, as it is now, and a large part of clients called the startup, perceiving it as an ordinary recruiting agency. A telephone was installed in the founders’ dorm room. “When we had a party, we had to turn off the phone,” Nelson told FT.

Armstrong was the CEO of University Tutor until May 2012, before he founded Coin base. University Tutor itself was eventually sold for 21 times its annual income, Nelson said, without disclosing the buyer or details of the deal. But it seems that Armstrong was a little cunning in his oath of gift that he did not found startups worth more than $ 1000.

After graduating from university in 2006, Armstrong went to live in Buenos Aires (Argentina) for a year. “I decided that since I’ve never been to Latin America, it’s a good idea to go there for a year and work remotely. Such an adventure, ”he explained to Forbes. He watched hyperinflation with his own eyes and thought hard about how to protect himself from it. Armstrong came across Satoshi’s White Pages, a document published two years earlier in which the creator of Bitcoin explained the principle of cryptocurrency. It was around Christmas, and his mother came to his room with the words “all relatives are gathered downstairs, go sit with your family,” Armstrong recalled in an interview with The Wall Street Journal. But he was so carried away by the reading that he stayed at his place and read to the end.

He bought $ 1000 worth of bitcoins when 1 bitcoin was worth $ 9. After a while, the cost dropped to $ 2, but Armstrong still believed in the future of online money. Cryptocurrency rates are still insidious, unpredictable and feverish Coin base, strongly affecting its income (when the rate falls, operations with cryptocurrencies freeze and the exchange does not receive commissions). But former employees described the FT Armstrong as a stress-resistant guy whose mood rarely changes with ups and downs.

In May 2011, Armstrong, while continuing to run University Tutor, took a job at Airbnb. Then the startup had only 35 people. He was responsible for combating fraudsters and conducting payments, which gave him the opportunity to learn about payment systems in dozens of countries where Airbnb operated. Armstrong received several more arguments in favor of cryptocurrencies. Firstly, it was difficult and expensive to transfer money: “High commissions  long delays  complete lack of transparency – we tried to send money to Uruguay and never knew how much of it would reach the recipient” (quote from Forbes). Secondly, he witnessed how, at the request of the US authorities, Airbnb instantly stopped working in Cuba, writes Time magazine (Airbnb returned to the island only in 2015). Armstrong concluded that cryptocurrencies allow the trading of services and goods with less risk than when the state has the ability to intervene in the game. “I wanted the world to have an open financial system that stimulates innovation and freedom,” he told Forbes.

Working evenings and weekends, Armstrong wrote a smartphone app to buy and store bitcoins. But it was unreliable due to the weak protection of the phones. In addition, due to insufficient computing power of mobile phones, transactions were extremely slow. However, the app turned out to be popular anyway. “I realized: you need to create a reliable cloud service – the future belongs to it,” Armstrong explained to FT.